Lulu and I spent a good while on the deck this evening watching the fat clouds roll in over Mt. Shasta to the north and Elephant Butte and Lassen in the east, with darkness creeping across the valley as the sun disappeared behind us in the west, behind the coast range. Thank you for this, Lord.

It seems that we're about to get kicked in the butt by another early spring; days are warm, nights are cool but moist, and everything with roots in the ground is putting out green shoots and new leaves. We've gotten a lot of rain so far this year, with more in the long-range outlook; reservoirs and lakes are rising, streams, creeks and rivers are up and running high. The water picture is brightening, at least here in the North State, but the drought is far from being broken, nor will it be this year even if we were to have our wettest 12 months ever, according to the people who are supposed to know. And, in keeping with human nature as we know it, most of the reporting cities and water districts have missed their conservation marks during the past 2 months, believing that since it is raining everything must be okay. Way to go, guys.

So, anyway, surveying the North Valley from here both Shasta and Lassen are showing solid snowpacks from top to timberline, but with the aid of binoculars we can see shades of new green popping out at lower altitudes. If this warming trend continues, and it seems that it's likely to do so, both mountains will probably be active by mid-April at the latest. For tourists, this should be a superb spring and summer for a North State visit, especially hiker/climbers and kayakers. The last couple of seasons have been drought-crippled, and understandably so, with rivers and creeks drying or pitifully thin due to the drought, and forests brown and tinder-dry, but things are beginning to look as though a green year is in our immediate future. This is a good time to look at a Norcal vacation, friends, particularly if you've never been north of Sacramento or west of Reno/Tahoe. You'll be amazed at what you've missed. You may even find yourself looking at retirement or get-away real estate, and there probably won't ever be a better time, given the local market. I'd buy more if I could afford it. Check us out; both Shasta and Trinity counties have pretty decent web representation; look with enthusiasm and you'll find lots of information about us and all we've got to offer those of you looking for something and someplace a little off-center and new to kick back and enjoy life for a while. You don't know what you're missing.

New subject. I was prowling through a shelf of almost-forgotten albums last week and stumbled onto an old copy of Gerry Rafferty's City to City. For those of you who don't know, never knew, or have forgotten, this was a cornerstone album of of late '70s rock and roll from the former front man of Stealer's Wheel, a more or less edgy Scottish band that came and went very quickly for a number of reasons, but which left a small legacy of pretty strong music behind. Anyway, it isn't Rafferty's vocals that caused my addiction to this odd collection of tunes; rather, it was (and is) the incredibly spooky and powerful saxophone work of Raphael Ravenscroft, which still, to this day, after a thousand or so times sitting captivated, can stop me cold. I only discovered, a few days ago, that he had died a couple of years ago, in 2014, at the tender age of 60. A sad discovery it was, too. Ravenscroft, as brilliant as he was at his particular craft, was never acknowledged for it by rock fans in general, and actually took some unwarranted abuse in later years from internet rock psychos who resented his work on the City to City album. Not being psycho myself, I never really spent any quality time trying to understand their arguments, which had to do with some other player they felt should have been on the record, and I don't care now, either. All I know is that I love the man's playing, and we're poorer for his passing. If you want to know why, pull up and listen to the album, or better yet, just 2 tracks: Island and Baker Street (considered the most famous saxophone performance in rock and roll history by many). You'll never forget 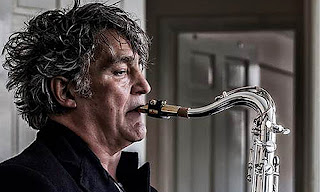