farmers' markets: what have we learned?

for one thing, we've learned, over the years, that there's a lot more going on at most of them than you might think. they're generally more than a collection of pick-ups, ex-hippies and organic squash.

almost every city and town has one, if only seasonally, especially when you get out into the countryside, and folks get very possessive of their favorites, sometimes making a point of going by every week just for the social value. at times they can seem more like county fairs than anything else.

which brings me to the subject of this year's version of the redding market, one of northern california's most interesting, at least lately. i have no idea what the organizational structure might be; since it's located in the little park behind city hall I have to believe that there's some level of local bureaucracy involved, but who or to what degree I don't know. however, whoever might be doing the job is doing okay.

not only do we have llama breeders peddling their knit-wares, but they're cheek-by-jowl with the pie lady (whose little individual-size peach pies were ass-kickers), the Asian-immigrant tomato/squash/cucumber/pepper farmers from chico, the olive farmer/oil producer from happy valley (pretty good table oil, but a tad precious in price), and the tamale ladies from down the street (Colima tamales, which one could happily live on, and which we'll have more to say about later), as well as 40 or 50 other farmer/vendors from shasta, tehama, glenn, and trinity counties, as well as parts unknown. as well as a different set of musicians each week, who settle fairly comfortably beneath the sparse shade, extension cords running this way and that, and making music of varying value.

and that brings me to the point (or one of them) of this post: once in a while you stumble on someone or something that surprises you in a pleasant way, and this summer Colima tamales were that someone/something that I was lucky enough to discover: they are wonderful, and I want to eat them regularly forever. i'll have more to say about this very soon, but all you have to do right now is wish that you were living somewhere you could get them. (if you are, say, in one of the above-mentioned counties, get yourself online and find their website to locate a place to buy them). not only are they delicious (melt-in-your-mouth so) but I'm pretty sure that I look exactly like robert redford for about an hour after I eat one.

and, to close for tonight, I have to say that there have been some pretty decent musicians on hand this year. I tried to get cards and/or names from the folks that caused me to stop and listen but missed some, or lost them after I got them, so don't feel right about naming names, but will try to come back to this after I can get my information straight. apologies where due.

more very soon, tomorrow probably, as I've got more to talk about, but ready for bed. the photo, by the way, is looking out across the far north valley off our deck after the first rain in almost 7 months at a double rainbow: thank you, Lord, life is good. 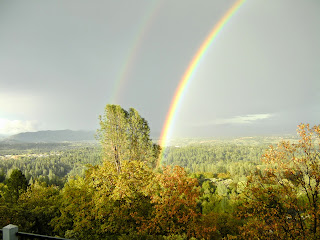